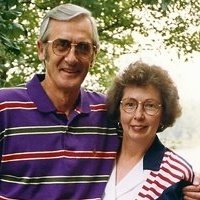 In January 2008, Don Chaffin, was diagnosed with Amyotrophic Lateral Sclerosis (ALS) or what is more commonly known as Lou Gehrig’s disease.

Weakened by ALS, Don continued to preach at the Zion Church of Christ throughout 2008 and into 2009, delivering his final sermon from a motorized chair and aided in breathing by oxygen tanks. Even after he stepped down from the pulpit, Don refused to quit preaching continuing to deliver daily words of wisdom through his Facebook page to the hundreds who quickly began following him.

Don went on to walk the streets of Heaven on January 17th. For those of you who knew him, you understand what an amazing impact he has had on so many lives. His entire life has been dedicated to giving to others.  Now it’s our turn to honor Don’s life by giving to others as he gave.

The Run 4 Don embraces his legacy by raising money in his name to support a student in his or her pursuit of a Christian education and to fund research dedicated to finding a cure for ALS.

On behalf of the Zion church of Christ we wish to release this video tribute in honor and memory of Donald Chaffin. We hope you enjoy it and we hope you will share it with others. We love you Don. Thank you for giving to the Lord!

How You Can Help